By clicking “Accept”, you agree to the storing of cookies on your device to enhance site navigation, analyze site usage, and assist in our marketing efforts. View our Privacy Policy for more information.
PreferencesAccept

No items found.
Product is not available in this quantity.

Chinese calligraphy is one of the most respected art forms in China, and has a long history. Indeed, the most well-known calligrapher in history is Wang Xizhi (王羲之), born in 303 AD; his works are still widely studied today, by calligraphy students and experts alike. Chinese calligraphy is written with a pointed brush, known as a mǎobǐ (毛笔). The brush is a very flexible writing instrument which makes it possible to create a wide range of effects, from strong and stately to fluent and dynamic to nimble and fleeting.

Unlike in Western or Arabic calligraphy, where students typically start by learning a particular alphabet, students of Chinese calligraphy typically start by copying the characters written by a famous master. Since there are thousands of characters, the goal is not to study all each and every one of them; instead, the goal is to become familiar with the style of the master: their sense of balance, flow, contrast, etc.

Then it will be your turn. We will study the regular script of Ouyang Xun (欧阳询, 7th century AD), which today is regarded as a model script, and a good starting point for new students. We will study the basic strokes, write some simple characters, and finish by writing a short but meaningful text. Of course, there will be plenty of room for asking questions and personal feedback throughout the workshop; if there is something specific you would like to write, we can probably accommodate that also.

Depending on participants the workshop will be taught in English or Dutch; of course, questions can always be asked in either language (or in Chinese). 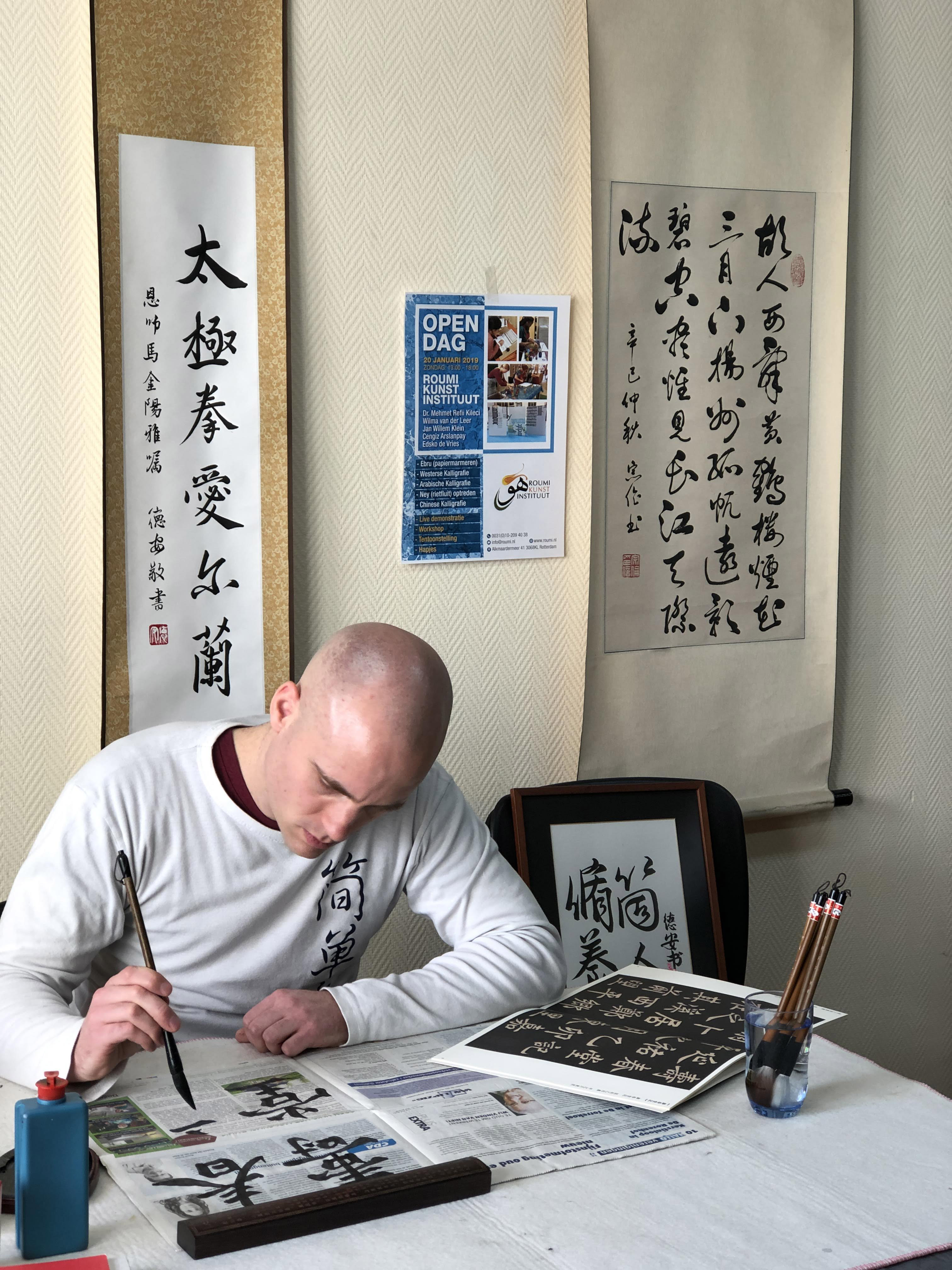 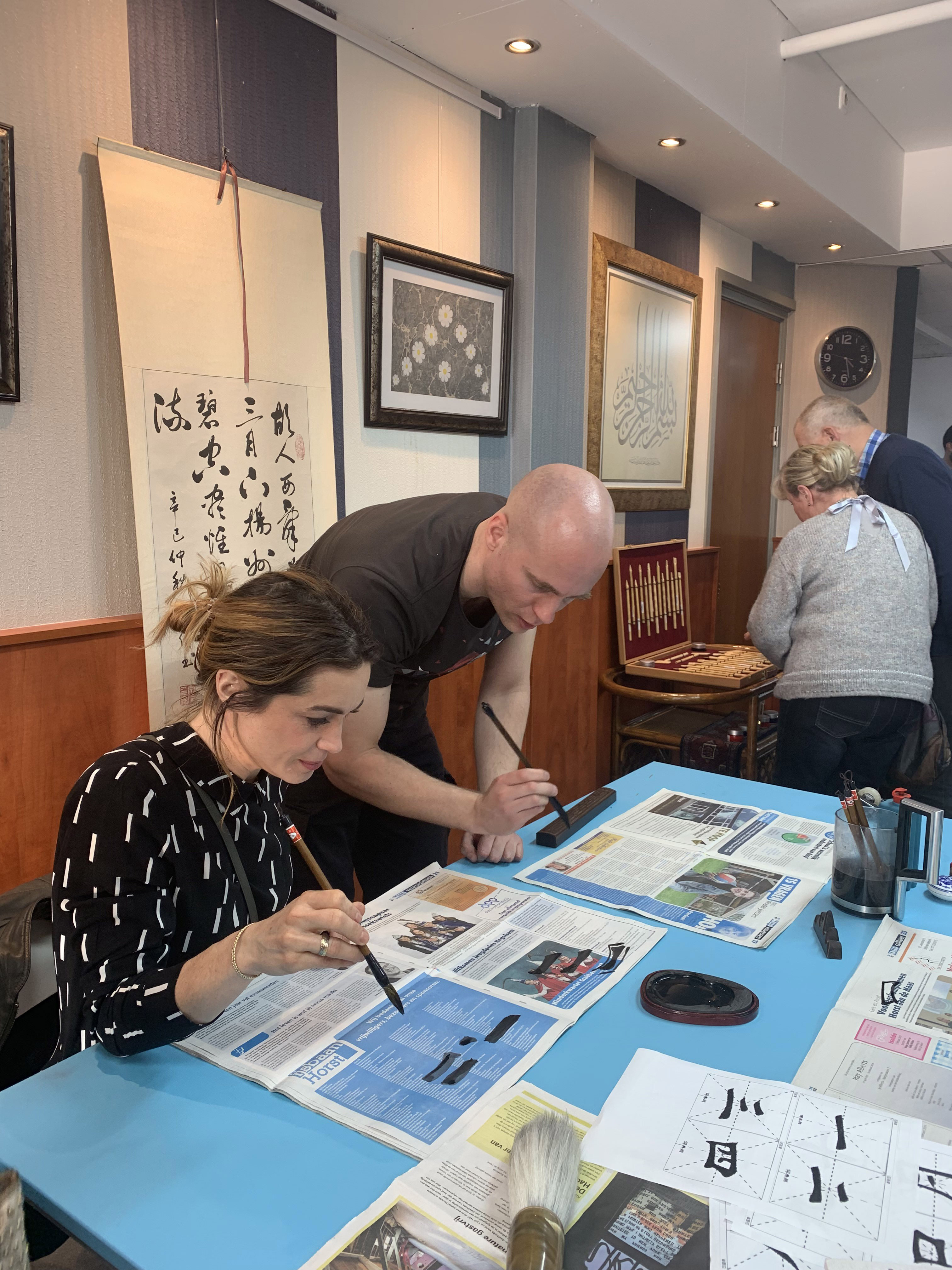 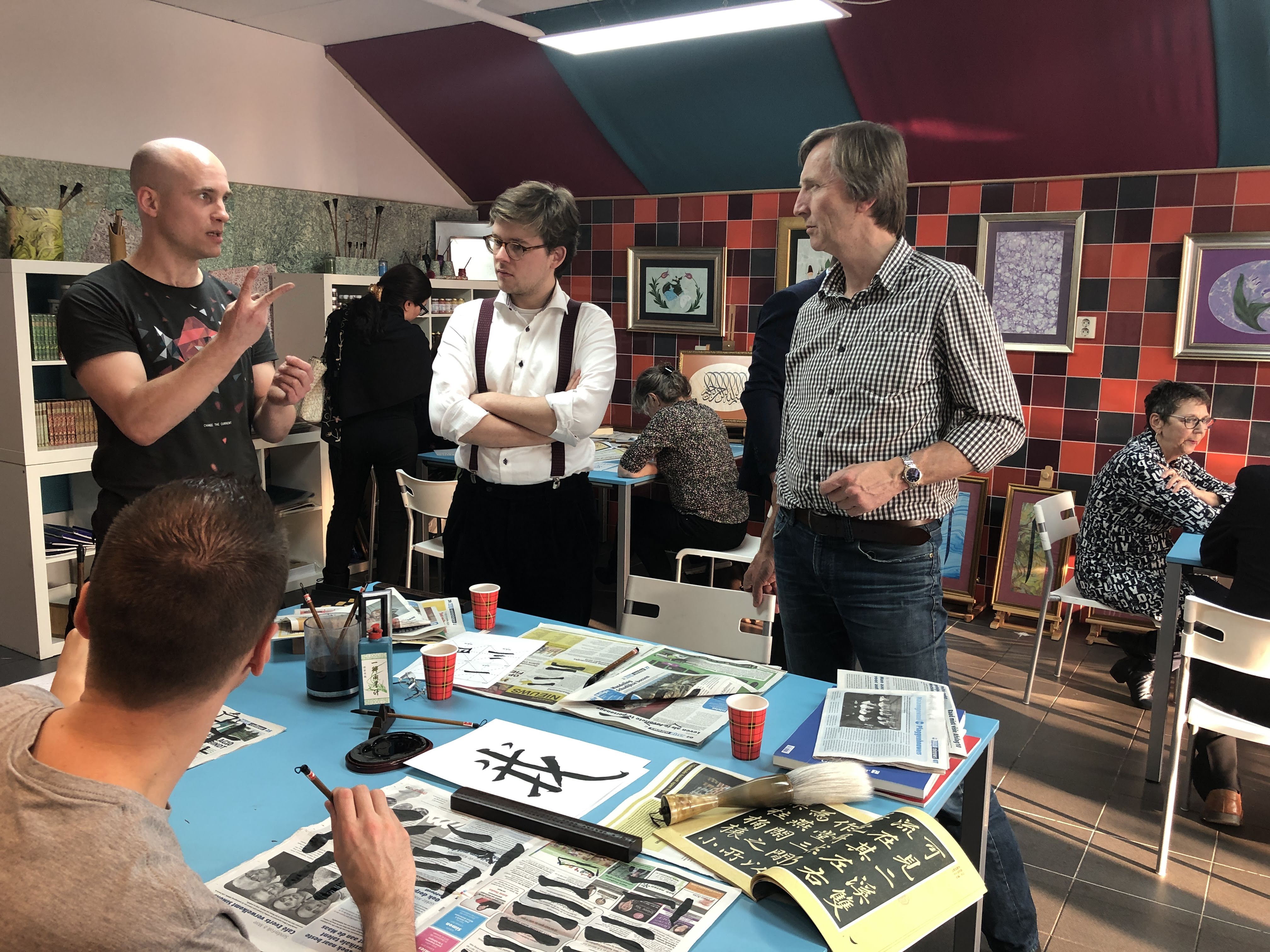 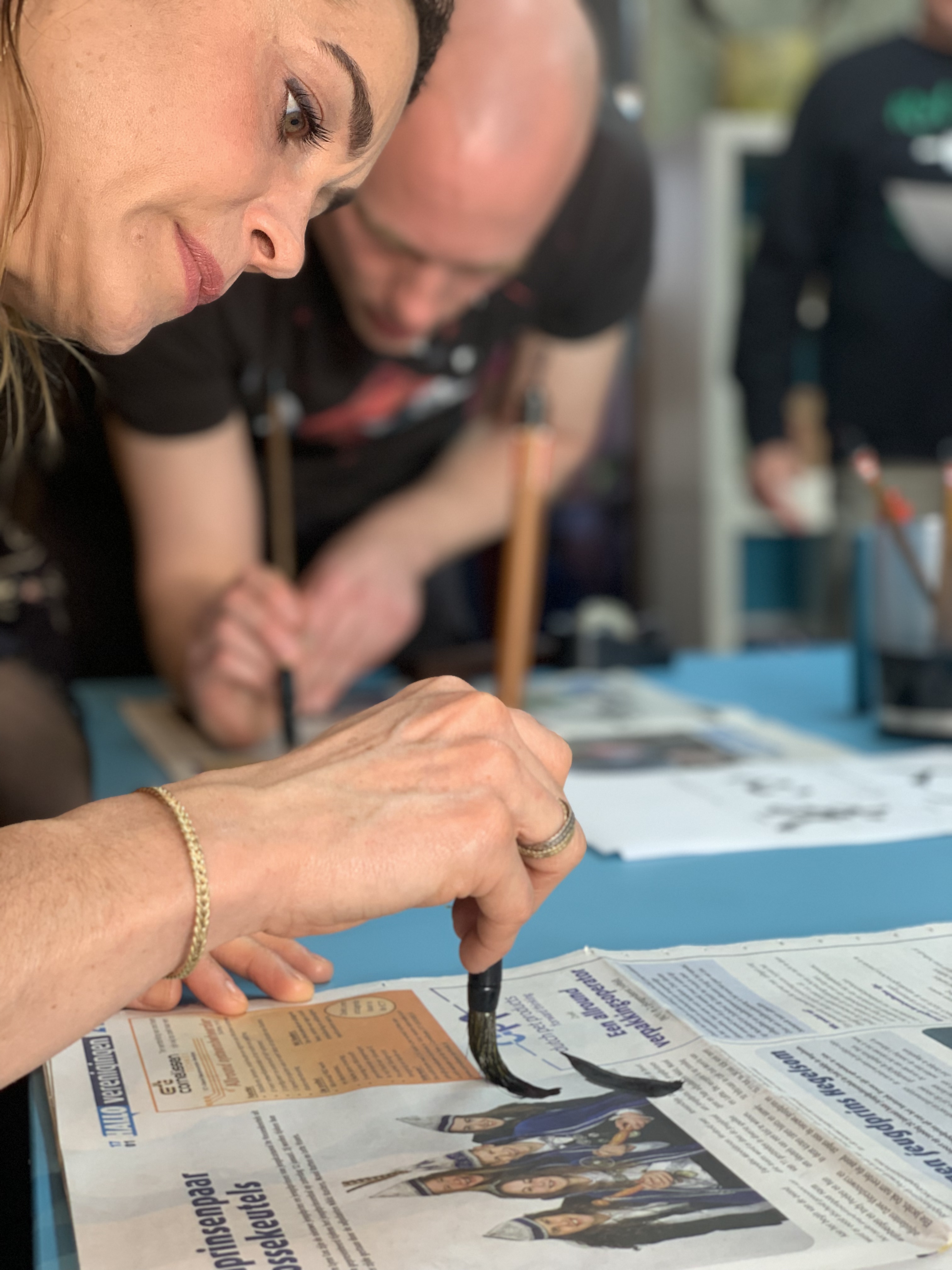 Do I need to bring anything with me?

Can I take the artwork I create during the program with me?

Sure, all the artwork you will be creating will belong to you.

What is the group size for classes?

Can workshops and courses be organized at a different location?

Yes, we can organize both workshops and courses at your preferred location as long as there are sufficient number of participants.

Do I need to have any prior experience?

No experience is needed at all, anyone can join our programs and we will ensure you have an enjoyable experience.
Choose from the available sessions
There are currently no sessions available.
Please check again later, or request a private course/workshop with your friends. 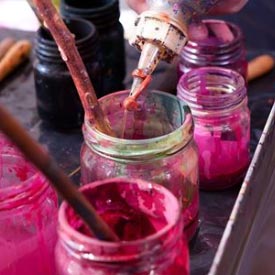 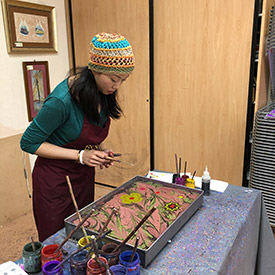 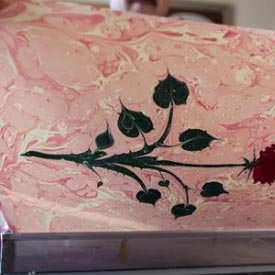 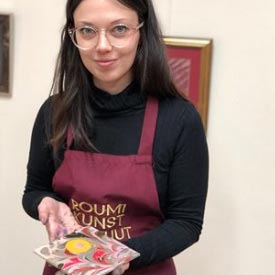 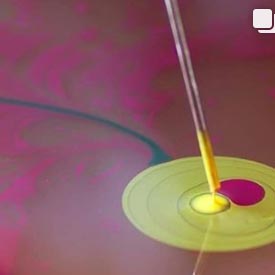 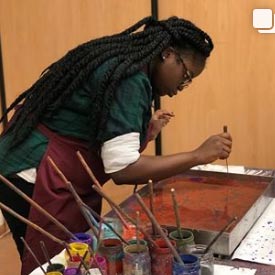 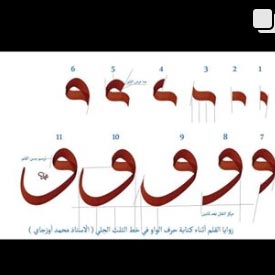 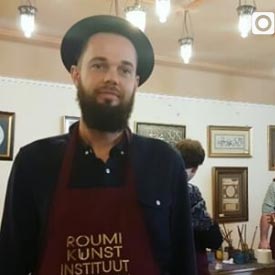 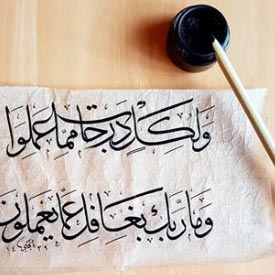 Thank you! Your submission has been received!
Oops! Something went wrong while submitting the form.

Getting there by public transport:
‍
From Rotterdam Central Station, take the train and get off at Station Schiedam Centrum. Then, take the metro line B in the direction of Hoek van Holland Haven, get off at Station Vlaardingen Centrum, which is 5 minutes walking distance from our studio.

Free parking is available on several streets close to our studio, such as part of Landstraat en Vetteoordskade, click here to see a detailed map. You can also park for 2 hours for free on Westhavenkade with a parking disc.

Sunday parking is free.
You can reach us at hello@rumikunst.com,
by filling in the form below, or calling at 010-2094038
Thank you! Your message has been received!
Oops! Something went wrong while submitting the form.